The story behind honeysuckle ​
Climbing and trailing plants are very popular, because they grow upwards and therefore do not take up much space even in smaller gardens. Honeysuckle (scientific name: Lonicera) is one of them. The plant has the botanical, natural look that is so popular right now, complete with exuberant flowering on a relatively modest size area, with the ability to climb upwards and to trail along a fence, pergola or drainpipe. The flowers have a lovely scent; the fragrance is particularly released in the evening when it attracts evening pollinators like the silver Y moth and the hummingbird hawk-moth. During the day the flowers attract insects including bumblebees and honeybees, so it’s a real benefit for nature in the garden and the surrounding area. 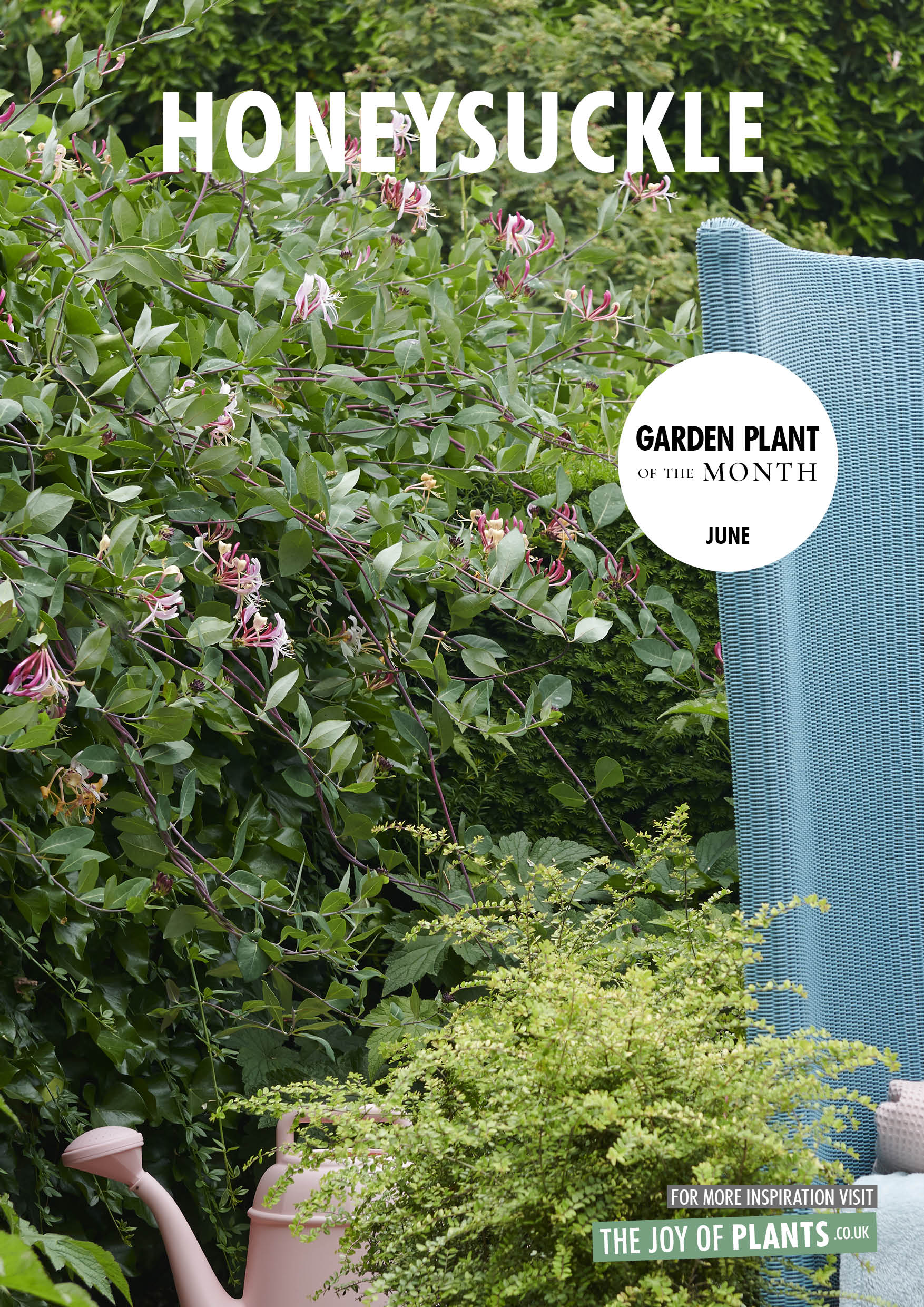 Honeysuckle is a member of its own honeysuckle family, and grows mainly in the northern hemisphere. There are some 180 species, of which 100 occur in China, where many poems have been devoted to the plant. Alongside the cultivated garden varieties, honeysuckle also occurs extensively in the wild, particularly on the edge of thickets where the plant can get plenty of sun. The plant has been known to humans for centuries. The strong, flexible vines were already being used as far back as the Bronze Age to make rope.

Range
Honeysuckle flowers are spectacular: a group of tubular petals accompanied by stamens and a selection of tendrils that surround and hang from them like a fringe. The flowers are often dark pink and golden white, although they also occur in other shades such as deep orange and purple and yellow. After flowering the plant produces red, blue or black berries. Honeysuckle is available in climbing varieties and deciduous and evergreen shrubs, so check what suits the position best. The plant will reach a height of between one and four metres, depending on the species, and flowers from June to the end of September/beginning of October.

What to look for when buying honeysuckle​
• The pot size, the number of stems and supports in the pot and the height of the plant must be proportion, and honeysuckle must be firmly rooted.
• If the plant is offered in bloom, check the ripeness and look for wilted flowers. In the absence of flowers an attractive label on the plant or sticker on the pot helps reinforce the appeal. It should include information on whether the honeysuckle species is deciduous or evergreen, and what colour the flowers will be.
• Honeysuckle must be free of pests and diseases when purchased. Make sure that there are no aphids or mildew on the plant and that brown leaves have been adequately removed.

Care tips for consumers​
• Honeysuckle likes a spot where the roots remain cool and the flowering upper part gets sun. The more sun the more flowers.
• Because the plant can easily wrap itself around other plants, it’s important to think about its neighbours and whether a vertical green carpet is desirable or whether there should be some space left in the garden. In the latter case it’s best to place honeysuckle in a more spacious spot.
• The soil can be a bit damp. Placing attractive stones around the stems both helps to keep the roots cool and prevents the unnecessary evaporation of water. Planting a low bush in front of it also provides some shade on the roots.
• Adding some dried cow manure once a month during the growth period from March to May helps keep the flowering going.
• There’s no need to prune, but you can prune it if necessary. The plant will shoot during the next flowering period.

Sales and display tips
At the time of sale honeysuckle is not the world’s most appealing plant. You can use the official Garden Plant of the Month images to give an impression of how beautiful the plant will look in a couple of weeks’ time. Displaying a couple of larger specimens with flowers in an attractive pot with a bistro set helps to create a summer atmosphere. Adding an insect hotel helps make clear how important honeysuckle is for wildlife in the garden and beyond. And finally you can provide scent strips as inspiration for how honeysuckle smells on a lovely summer evening. Perfumes with a high honeysuckle content are Eau de Givenchy and Aerin Lauder Mediterranean Honeysuckle.

Honeysuckle poster
You can also download the poster below.