The Let Hope Bloom campaign that we launched on Friday 27 March has been a message welcomed by the industry and consumers alike. Consumers in all four countries have been reacting enthusiastically to our Instagram and Facebook posts, and are being widely shared with numorous new visitors to Funnyhowflowersdothat.co.uk.

We are seeing many more people than expected picking up the #lethopebloom hashtag, sharing our message of hope, and even creating their own message with this hashtag. Influencers like Jeff Leatham and other celebrities are adding their support through their social media platforms. We are also seeing a lot of reposts in many countries outside Europe.

The floriculture sector is responding with enthusiasm and great appreciation. They are sharing the campaign images and the video in newsletters and via social media. Various news reports in national media and magazines highlighted the message straight after the launch. 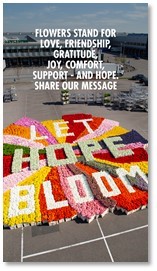 We have boosted the Let Hope Bloom campaign further with online banners in media and posts on Facebook and Instagram. Influencers have been contacted in all countries to promote #lethopebloom and the French equivalent #lespoirfleurit online.

More media inserts
We have also placed full-colour advertisements in national daily and weekly newspapers in Germany, France and the Netherlands from the start of April, including Die Welt, Welt am Sonntag, Bild am Sonntag, Die Zeit, Le Parisien, Le Figaro, L’Equipe, De Telegraaf and Algemeen Dagblad. In the United Kingdom, banners and video appeared in the Cultural Channel and the ‘You’re Not Alone’ section of The Telegraph Online - a section that has been specially created to offer an optimistic view alongside the generally sombre news relating to the coronavirus.

Regional newspapers in the Netherlands have also been provided with the Let Hope Bloom advertisement, which they will publish free of charge where possible. Two outdoor advertising operators have offered ads on billboards alongside motorways, at important transport hubs and in major city centres and digital screens in metro stations free of charge. This is an offer that we naturally gratefully accepted.

Dutch radio stations 100% NL and Sublime started a campaign to express appreciation for people in these challenging times with a bouquet of flowers. Naturally they are thereby crediting Mooiwatbloemendoen.nl and #lethopebloom.

In this way we are seeking to maintain momentum and continue to spread the symbolic message of ‘Let Hope Bloom’ in a gigantic floral sculpture, and show the world that flowers are always there for us.