Alocasia, also known as elephant’s ear, has large, beautifully marked leaves. Despite the fact that it’s a sizeable plant, it still look airy and stylised thanks to the tall, smooth stems that grow out of a corm. Those stems can be plain, but can also have tiger stripes, and the foliage is equally remarkable. There is a species with leaves that resemble African masks, one with crinkled leaf edges, and one that is called the skeleton plant because the leaf veins are so clearly marked. The flowering (in the form of a spike) is not particularly impressive with this houseplant. The decorative value lies particularly in the magnificent foliage.

Origin
Alocasia is a member of the Arum family, and grows in the tropical rainforests of South-East Asia. It is particularly common on Borneo, and can reach a height of four metres. There are 79 known species. The plant has been cultivated around the Equator as a foodstuff for thousands of years. Decorative plants have been bred from the original versions. These aren’t edible, but they are very beautiful. Alocasia conquered living rooms in the 1950s, and has a great vintage vibe.

What to look for when buying Alocasia 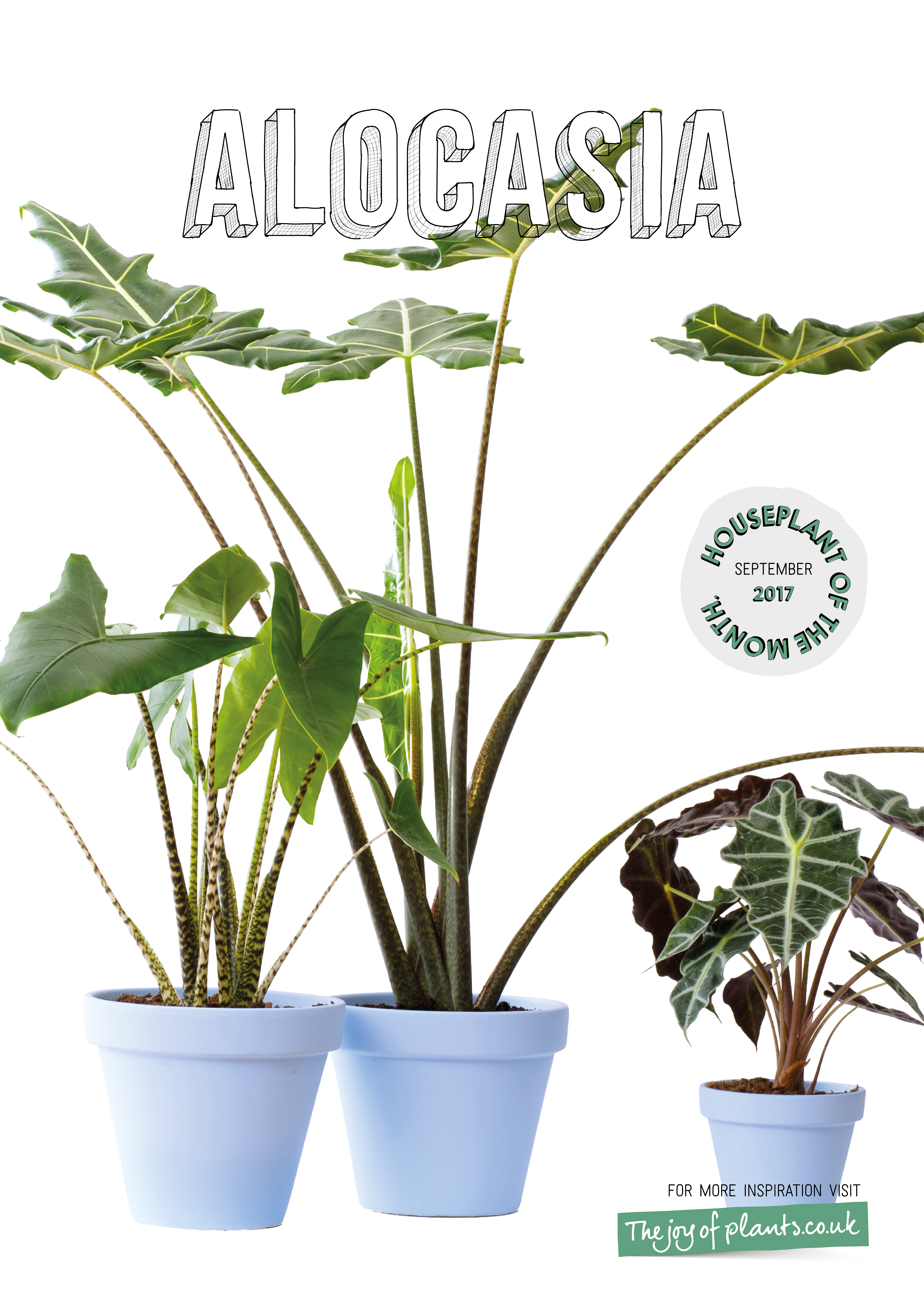 Choice of range
Alocasia is best known in the form of the skeleton plant with distinctive leaf veins, Alocasia x amazonia. There are a number of cultivars of this species: the compact ‘Polly’ and the smaller ‘Bambino Arrow’. The leaves of these plants resemble an African mask. Large-leaved species are: A. ‘Calidora’ which has a large green shiny leaves with very thick leaf stems. A. ‘Portadora’ has large green shiny leaves and distinctive rusty ‘spots’ on the stems. A. Lauterbachiana has elongated, wavy leaves of which the stems and the underside of the leaf are coloured red. A. Cucullata has arrow-shaped leaves and a compact green shape. A. ‘California’ has very large leaves and can also cope with somewhat lower temperatures, which makes it suitable for use as a conservatory or container plant. Particularly distinctive displays are offered by A. ‘Black Velvet’ (a silvery white vein in almost black leaves which appear slightly velvety) and A. zebrina with arrow-shaped leaves and a distinctive striped stem.

Sales and display tips for Alocasia
Alocasia brings a tropical mood to the interior, purifies the air and can be used all year round in the home, office, school or public spaces. The plant is also very suitable for use in hydroculture. The large specimens look best on their own in a spacious setting, whilst the smaller can also be used in groups. A simple container is best in order to optimally show the spectacle of the leaves and stems.

Images of Alocasia
You can download and use the images below free of charge crediting Thejoyofplants.co.uk.

Alocasia posters
You can download the posters using the link below. September 2017: Alocasia Houseplant of the Month
Download image
Prev Next